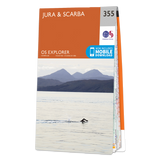 Far away on the West Coast of Jura, sheltered from the sea behind ancient rises of the land, resides Loch Cladach Nigh' Mhaol-choinnich - known locally as Duck Loch. Recalling the machair lochs of the western Scottish isles, the abundance of wildlife, plentiful plant life and ethereal terrain all begin to tell the story of the fish that may be found here.

A shallow loch, Duck Loch's remarkable feature is a spreading reed bed occupying the centre of the water that restricts casting and provides food and shelter for the resident brown trout. The north end of the loch has a tendency to recede and expose the mixture of peat and boulders that make up the bottom. Wading is possible all around yet the gradual slope of the bank and the lack of snags behind makes casting easy for the shore fisherman as well. The northern edge is generally grassy and rocky underfoot whilst the southern side can be unstable and marshy. Take care when navigating the south west edge as the feeding burn creates a large and deep channel that is best worked around.

Duck Loch is best fished from dusk into nightfall, from the north side with your back to the sea, though good sport may be found all around the edge. Despite the small size of the loch large fish may be found here; it is not unknown for several fish upwards of 2lb to be caught in a single session. One corner is known for big fish, a secret that should be kept, but the small size of the loch means the determined angler will surely cover it. As night comes on, try a dark fly pattern retrieved slowly from the reed bed as near to the surface as possible.

Duck Loch is situated in a relatively low lying part of the landscape and may be approached from all sides, however the lack of vantage point on approach means the loch can easily be missed.

When walking the edge of the loch, take care not to disturb the waterfowl that arrived there long before you. Tired legs may stumble on the piles of deposited stones marking ancient ice age era beaches, now mysteriously appearing inland as this part of Scotland has risen slowly from the sea.

Fishing parties of up to ten people can be catered for. Ring or email Craig on 01496 820287 or fishing@ruantallain.co.uk, for more details.


After trying coarse fishing as a teenager and sea fishing on family holidays to North Wales, Tom discovered fly-fishing for wild brown trout through the persistence of a good friend. He can be found stumbling around the banks of Cumbrian waters or the remote lochs of Scotland. A tall man, he's the designated pack mule and is capable of carrying campfire wood over great distances.