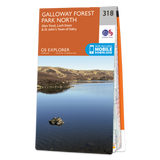 Concealed high up in the Galloway hills and occupying a granite basin overlooked by the highest mountain in the southern uplands, lies Loch Enoch - the Icy Loch. At some 1600 feet above sea level Enoch once suffered the effects of industrialisation and was thought to have completely lost its fish population by the 1950's, but an increase in pH and a period of recovery led to a restocking of brown trout in 1994. The quality of Enoch's fishing is now found in its remote location, diverse and recovering environment, and rich history.

Numerous basins offer the shore angler a range of promontories and vantages to fish from. The varied edge of the loch, with its three islands and jutting headlands makes traversing the perimeter in a single day a challenge for even the most persistent and agile fisherman, but a range of options is guaranteed no matter which way the wind is blowing. At 50ha the surface of the loch is small relative to the long perimeter and in parts the loch shelves off quickly to an estimated maximum depth of 120 feet. Although surrounded on all sides by high ground, the slope to the shore is mostly very shallow, making for easy and carefree back casts. Wading is very manageable and the shallow fisherman will find a range of grass, rocks and coarse sand underfoot.

Hard-fighting brown trout upwards of a pound may be caught here. Fish cruising the drop off will take a Half Hog Hopper from the surface, fished at the end of a light leader. On overcast days take advantage of the variety of Enoch's features with your favourite imitation pulled through the water at different depths.

Loch Enoch is not easy to reach and camping near the loch itself or further down in the hills is recommended. From Glen Trool car park cross the bridge at the Buchan Burn and follow the path on the east side of Buchan Hill and the route of Gairland Burn to Loch Valley. Skirt the west edge of Loch Valley and head for the north side of Loch Neldricken. From Neldricken follow the easier route between the ridges to the south east basin of Enoch.

Fishing Enoch is a challenge made richer by its turbulent past. As you travel the south west shore of the loch, look out for the recovered wreckage of a WWII bomber, brought from the water by divers in the 1970's. When breaking for lunch, keep in mind that during the 14th Century, Robert the Bruce himself may have taken refuge on these shores.

Permission isn't required for lochs situated high up in the Galloway National Park.

If you are uncertain please contact the Forestry Commission Scotland, you can find their details on the Galloway Forest Park page.

Please be aware that this is a natural resource and is still recovering from the effects of acidification. Remember to try and do your bit and return the fish to the water unharmed.


After trying coarse fishing as a teenager and sea fishing on family holidays to North Wales, Tom discovered fly-fishing for wild brown trout through the persistence of a good friend. He can be found stumbling around the banks of Cumbrian waters or the remote lochs of Scotland. A tall man, he's the designated pack mule and is capable of carrying campfire wood over great distances.