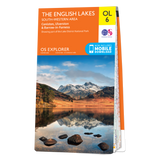 Sitting approximately 3 km to the north west of Grasmere is Easedale tarn. It is dominated by Slapestone edge to the west and Greathead crag to the north. The tarn is approximately 500m long by 300m wide, and has a reported depth of 21m.

On arrival at the tarn the feel of the place is good, and you can see that on the southern side the tarn is probably much shallower than the northern side that drops steeply from the crags. Surprisingly there is a rock sticking out of the water towards the centre so it is clearly not a typical bowl shape. In some of the bays where the water is shallower water lobelia can be seen, and in the south-western bay, water lilies grow.

When I fished Easdale in early July, the tarn was surprisingly void of any surface activity. Very little insect life could be seen on the water; there were terrestrials being blown onto the margins and water skaters could be seen amongst the lilies. A pair of herons flew off as I arrived but they could have been feeding on the plentiful toads.

The fishing was a little disappointing, with most fish being in the 4-6” size. One that looked a little bigger was very dark and wriggled off the hook at the net. Almost all of the trout fell to a small black muddler hogs or elk hair caddis with most coming from the south eastern bay near to the point and to the left hand side of the inflow at the western side where the water appears to drop away steeply. I also had fish to the north-western corner.

The most straightforward route to the tarn is the tourist route. Park in one of the car parks at Grasmere, and follow the path that runs adjacent to Easedale Beck and then up Sourmilk Gill. Take a few minutes on the way up to enjoy the spectacular views back to Helm Cragg, and, if there is enough water coming down, a pretty spectacular water fall, and wild Juniper trees.

There is no information about permission and in this case I don't think that matters much. Just remember to take your rod licence.


Jerry loves his wild places and he started fishing for trout as a boy, in the streams of mid Wales, and the hill lochs on the west coast of Scotland. These days he tends to be knee deep in small Pennine rivers, or fishing the Llyns and tarns of North Wales and the Lake District. The experience is more important than the size of the fish, and wild is beautiful.