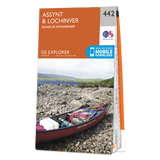 Reaching out into the Minch at the northern end of Scotland is a sandstone peninsula that lays claim to some of the oldest rocks in Europe. Loch Cul Fraoich is the main body of water on the peninsula and is said to be a magical loch, though it could be the geology and the close proximity to the sea that are accountable for some of the unusual tactics known to work here.

The perimeter of the water is generally quite regular making planning fairly straight forward. The position of the loch in the middle of the Stoer peninsula makes it vulnerable to weather from the sea and a strong westerly can make casting from the east bank impossible for most anglers. Don't let a strong blow put you off the loch entirely though. The western edge of the water is surprisingly well sheltered and a good session can start from the north end even in unfavourable conditions. The gradient of the bank is typically shallow making casting from the shore quite easy, though as usual in this type of terrain take care walking and choosing footholds. Wading is not generally recommended due to steep drop offs not far from the bank. Several weed beds at the north end should make for good and exciting sport if fished close enough.

Loch Cul Fraoich has a reputation for being dour and it is true that many anglers are frustrated even on repeat visits here. In fact stomach examination of the resident fish has shown that at certain times of the year trout are feeding almost exclusively on daphnia. Adapting tactics accordingly can yield satisfying results in this sometimes abundant loch. To catch cruising fish that are following the rising daphnia during the hours of dusk, try an imitative pattern retrieved very slowly at a slightly greater depth than you might be used to.

Reaching Loch Cul Fraoich is relatively easy and the best route to the loch is the most obvious one, via a track leading from the road through Culkein. Take care driving a car too far down the track as it is rough in places and parking is difficult.

Loch Cul Fraoich can feel like a forbidding place when the fish are not showing. But remember that in foul weather, as long as you are on the loch and not the sea, you should be safe from the Blue men of the Minch.

Permits are available from the following location: